Posted by Jerome Bleton at 10:55 AM No comments:

Posted by Jerome Bleton at 8:36 AM No comments:

Strolling in the Park

The parlous signs that the world really must,

After all, regrettably, fall apart.

Each one beams her anxious, necessary love,

And turns a blind eye to the chaos beyond;

Each flickers poignantly in the eye of the storm —

Each a dogged, tireless beacon,

Posted by Jerome Bleton at 8:34 AM No comments:

An Appetite for Destruction: The Admirable (and Farcical) Punk Bravado of RanXerox

There are no human beings in Stefano Tamburini and Tanino Liberatore’s mannerist cyberpunk fantasy world, only monsters. Cleaved, free-floating impulses disguised as people roam the dystopian cityscapes: the ferocious cyborg bully boy Ranxerox is only the most explicitly inhuman, but really, none of Tamburini and Liberatore’s characters are anything more than behaviourist “flesh machines” animated by simple, imperative desires. Insatiable appetites possess athletic frames with mindless animal ardor; feral ire and disgust abide in the hard little bodies of vamp assassins and heroin-shooting nymphet prostitutes; brutal lust and contempt can live indifferently within the fearful symmetry of fashionable patrician elegance or in the dumpy ugliness and ordinary deformity of the everyman. Everywhere, vulgar mugs leer and snarl and bite and lick and suck; powerful limbs kick and punch and squeeze and stab and crush. Since the characters have no depth, we accept that their bodies are merely the splendid impersonal paraphernalia necessary for fucking, for narcotic gratification, for assault and mayhem. Witness this skin fold, that roll of flesh; notice the ductile integument pulled taut over shifting sculptural configurations of muscle, bone, fat, connective tissue... The glorious integrated complexity of anatomical patterns swell like ripe pornographic fruit in each comic panel — just asking for it. Each human form is a miraculous balance of carnal vitality — but in this future hell of lust and fury, it exists only to be broken savagely, to be pulled apart with a child’s inquisitive cruelty. Veins bulge, blood spurts, sensitively textured flesh swells or sags or splits apart; cruel predators, narcissistic perverts, psychopathic fiends, casual murderers — sexy beasts all — mingle in knots of camp intensity… Each character is an object for the other to use and abuse in search of satisfaction.

In his little book about Leopold von Sacher-Masoch, Gilles Deleuze makes the argument that, far from being symmetrical, sadism and masochism are in fact incommensurable. In his view, masochism is about the tight containment and security that an explicit contract provides: pain will be meted out, but only within finely modulated parameters, agreed upon between contracting parties. There is no real loss of control, only the delicious temporary delegation of it. Sadism, on the other hand, is about transgressing any constraining norm to affirm an undomesticated, domineering self and destroy any competing claim to selfhood. So although gimp masks, slick bodysuits, and restraints appear from time to time in Liberatore’s art, it seems to me they are merely convenient visual markers for “deviance.” He likes his characters to be “freaks” and “perverts” but he’s not actually that interested in the dynamics of masochism itself. Tame masochists do however make good fodder for his psycho sadists — the real focus of his imaginative efforts — because attacking the former enhances the shock value of his flamboyant psychos’ real violations: masochists play by the rules, but the point is that his perfunctory killers do not.

None of this is to be taken seriously, of course. It’s all a bit of a joke. Punk bravado: ironically flaunting deliberate, aggressive ugliness as an aesthetic posture to protest the outrageous fact that there will be in fact “no future.” Ironic also the heady incongruity of rendering the most bestial impulses with such artful sensitivity — but then art is meant to be about sublimating our baser instincts, isn’t it? Surely Michelangelo himself — obviously Liberatore’s spirit animal — would have felt less compelled endlessly to represent such vital, heaving, superlative bodies had he instead simply followed his baser instincts and, once in a while, let himself get sucked off in the bogs?

In Michelangelo's art, the human form is the one expressive motif fit to carry, to embody, to express the soul's mighty struggle to find salvation. Liberatore's farcical cyberpunk romp has, of course, no such momentousness of purpose: we are merely offered the cruel/comedic/pornographic spectacle of vigorous bodies gleefully and mercilessly pressed against the unyielding dystopian environment that contains their helplessness and their ire — the cold hardness of metal, the dumb weight of concrete, the rude tumult of other bodies... And this science fiction future of Liberatore’s isn’t the real future; it’s merely an extravagant, stylised projection of the “present” (the late 1970s and early 1980s) because the real future, like our own death from our subjective perspective, is probably unimaginable and must remain forever at a prophylactic distance. Although there’s plenty of death and destruction in these stories, it’s never real death: on the contrary, I suspect these pictures to be controlled exorcisms. They channel the lingering existential echo of fearsome childhood rages of the kind that know no limit and desire the total annihilation of the other — that outrageous obstacle to fulfilment. In their own way, these evocations of primal brutality are life-affirming rituals — plugged into an authentic, visceral early experience, despite the artist's posture of arch, ironic distance. It strikes me that what is powerful about them is the genuine sense they give of the fragility of our embodiment (threatened by violence and madness, withered by dope addiction and old age, enslaved by sex and relentless desire…). In a soulless world, we can’t help suspecting that, like the punk Frankenstein monster RanXerox, we are not more than the sum of our parts. 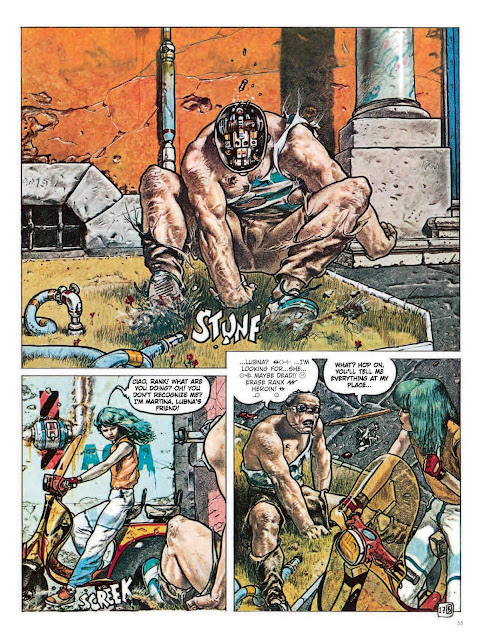 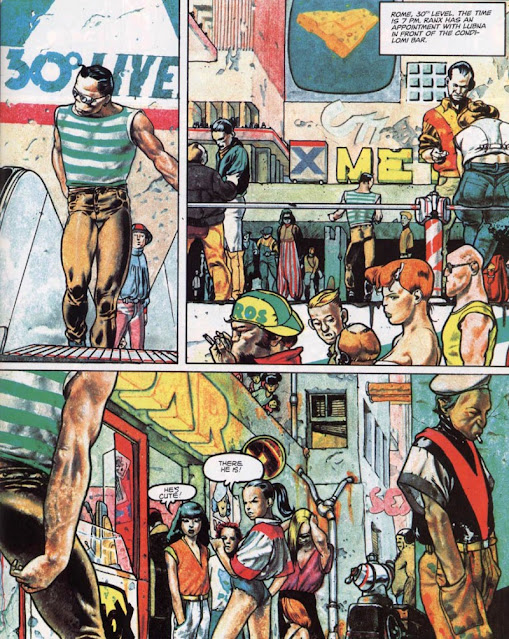 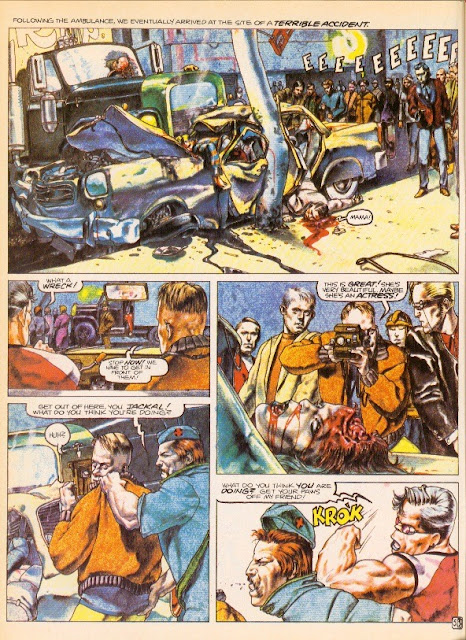 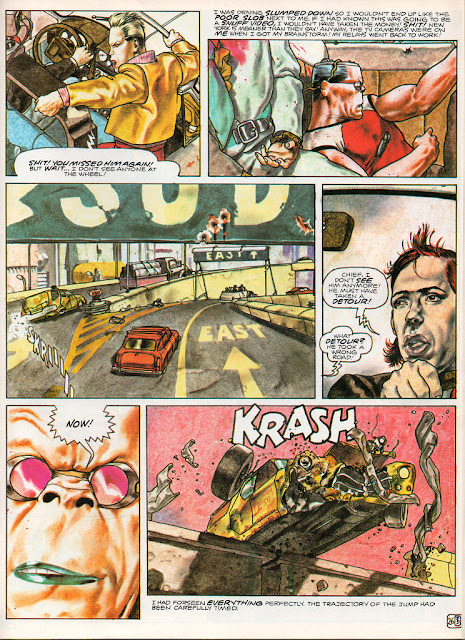 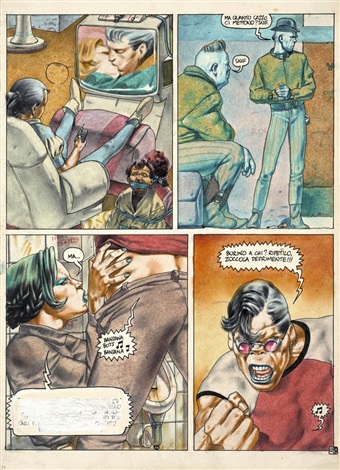 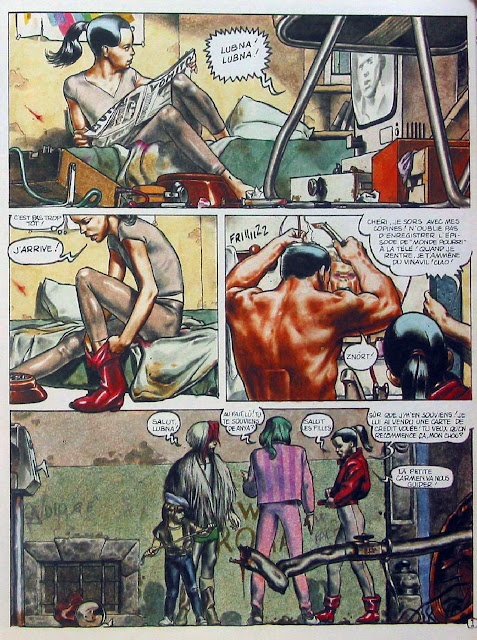 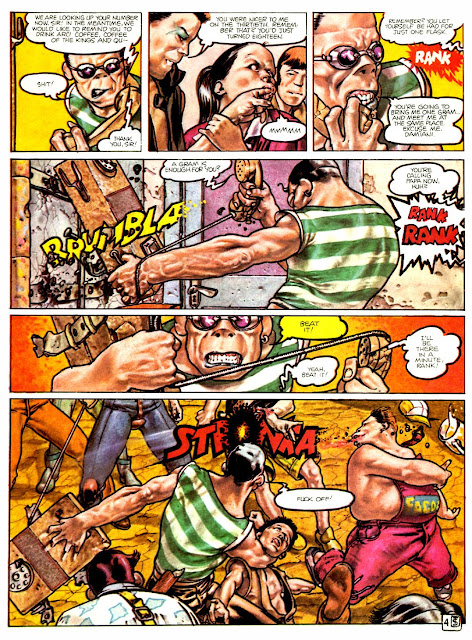 Posted by Jerome Bleton at 8:00 AM No comments:

Beyond the obvious, I think what excited me about her was the attitude of generous, unguarded tractability she always adopted as she opened up her softness to the hard male bodies that, alone or severally, pressed into her with such wanton persistence.

Amidst the obscene insertions, she remained serene — a pliant aquatic bloom shifting lazily in the current. Gladly, it seemed, and unaltered, she yielded to the groping and the prodding and the feverish thrusting that her body inspired.

I was sorry when, over the years, I noticed how she coarsened; how she learned to withhold and merely to go through the motions; how, rattling with counterfeit rapture, she long-sufferingly rode out what she could no longer construe as anything more than yet another dreary defilement. All the fun had bled out, and with it all the artless charm — leaving only a hard-faced whore’s mask of impermeable boredom.

Still, I wish her well. We were young together — trusting, misguided, unready. So full of life! Each in our own way, we did gamely seek to fulfil its sparkling promise. Only once it became apparent that our brittle hopes would, alas, never avail, did we learn to disguise our goodness and abide in wistful concealment. 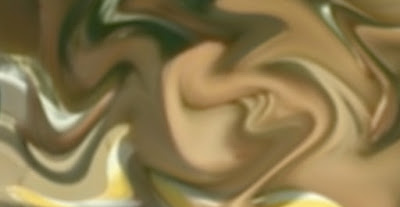 Posted by Jerome Bleton at 6:42 PM No comments:

a very nice note from a student

Posted by Jerome Bleton at 10:00 AM No comments: 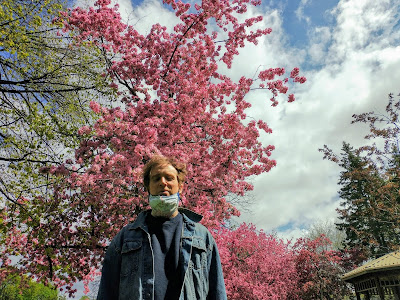 Posted by Jerome Bleton at 4:19 PM No comments: